Iron Maiden And Disturbed Join Forces For The Guy

This looks like an interesting update for Metal fans.

Iron Maiden’s Legacy of the Beast free-to-play mobile game is excited to announce a major in-game collaboration, this time with American rock legends Disturbed!
Following successful collaborations, last year with Amon Amarth, Lacuna Coil, and Ghost, Iron Maiden’s Legacy of the Beast has teamed up with Disturbed to bring the iconic cloaked mascot The Guy to life in the mobile game.
Legacy of the Beast has created a new limited-time, in-game event called, Disturbing Sciences featuring a limited-time character, The Guy. The game’s Disturbing Sciences event is an ode to both bands’ lore taking its broad themes from the cover of Iron Maiden’s 1986 album “Somewhere in Time” and Disturbed: Dark Messiah, a five-part comic book series where The Guy makes his comic book debut. Over the years, The Guy has been depicted as an antihero, saving people from corporate corruption, often through violent means.
In this new storyline, Cyborg Eddie and The Guy have been summoned through time and space to the Polvo Valley, a small town transformed into a hyper-sanitized, machine-driven industrial city, where Eddie and The Guy are dead-set on punishing the city’s corporate overlord – Brian Kek and confronting the CEO at Kek Tower before discovering the depth of his hubris.
Speaking on the new collaboration, Disturbed’s frontman, David Draiman shares
“My self and the guys from Disturbed are humbled to be included in the Legacy of the Beast game. We feel that The Guy is a worthy addition to the saga and we’re very happy to be a part of it … when we first saw the first concept pieces of how he would be integrated into the game it was thrilling for all of us, it’s still kind of surreal!” David continues, “I love that our dark messiah storyline from the Disturbed comic book series, {from the graphic novel} is being integrated into the video game series, I think they go hand and hand with one another. I love more people having the opportunity to play as The Guy … and battle the forces out there that deserve to have their asses handed to them.” 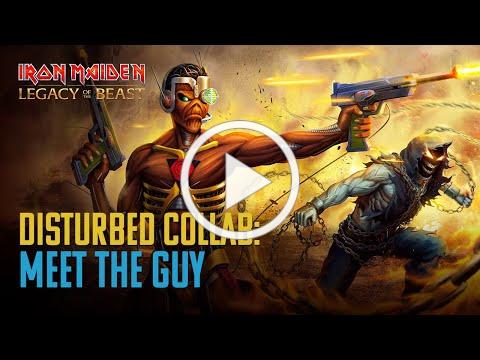 Navigator Games CEO, Will Moore says
“We had such a positive response to our in-game band collaborations last year, we wanted to keep the momentum going into 2022. We have several surprises planned this year, and what better way to kick things off, than by bringing Disturbed’s iconic mascot to life. It was such a natural fit to include ‘The Guy’ in Eddie’s world and have them battle the forces of evil together.”
In Iron Maiden: Legacy of the Beast, metal and RPG gaming fans take on the role of the band’s iconic mascot, Eddie who travels across a spectacularly diverse array of worlds by traveling through time in captivating 3D environments. Eddie appears in many forms, each a part of Iron Maiden’s rich history, and each with a set of special powers and abilities.
Meet The Guy in the Disturbing Sciences dungeon event in Iron Maiden: Legacy Of The Beast mobile game here starting at 4pm PT today (2/16).
Players can earn The Guy character for FREE starting February 16th by logging in a total of 7 days to receive The Guy on the final day. Ends February 23rd, 4 PM PT.
Over the years the game has expanded to include 20 dungeons and 6 unique Worlds, from the pits of Hell, Ancient Egypt, World War II to the far future, hundreds of characters including 90 Eddies based on classic Maiden album covers. A vast array of enemies – corrupt Demons (Lucifer, Baphomet), Gods (Horus, Osiris, Odin) and Monsters, a bloody Player vs Player Battle Arena and a ruthless Gauntlet feature designed to satisfy new players and hardcore long term players. The latest feature ‘Clans’ allows players to join forces with their blood brothers to complete team tasks and face off against monstrous Raid Bosses. All to an in-game soundtrack of over 30 Iron Maiden tracks including – The Trooper, Where Eagles Dare, Aces High and more.
Iron Maiden: Legacy of the Beast, is an action-packed, free-to-play mobile game available on Apple’s App Store and Google Play.

Afeera Comes To For Honor →

Shadow Over Morrowind Comes To ESO →